I interviewed one of the most talented multimedia artist… 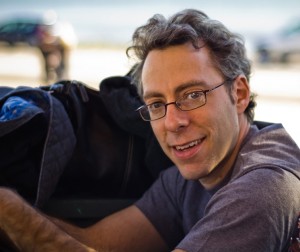 His interest is in finding a new artistic language to represent the experience of consciousness and in so doing, to use art as a tool to elicit a spiritual experience without resorting to the supernatural.

“Consciousness is not a “stream” but is more like a flood. It is difficult to capture its essence with language alone: words alone are linear and slow, and the terms and metaphors of folk psychology are coarse and misleading. That’s why reporting your own “stream of consciousness” is difficult: first-person reports are notoriously intrusive, unreliable, and unverifiable” he says…

He uses music, theatrical performance, photography, poetry, and film to illustrate the multi-layered complexity of recursive processing systems in the brain. Throughout his work, he introduces new concepts and techniques to show how the experience of consciousness emerges from the clamor of competing voices within the parliamentary chamber of the mind. The purpose is for the creation and viewing of the work to engender a feeling of awe at how the complexity of subjective experience emerges and evolves, without adding an extra element of “soul” or “consciousness” to the universe.

He graduated the Wharton School of Business (BS, Economics) and the Annenberg School of Communications (BA, Communications) at the University of Pennsylvania. He studied composition at the Mannes School of Music in NYC.

He started and ran the Philadelphia Music Conference, an international music festival. The event featured many gold-record-selling artists such as Lisa Loeb, The Nixons, Phil Spector and members of Nirvana and he is credited with discovering several major-label recording artists.

As Disc Makers’ Director of Business Development, he was responsible for overseeing the company’s strategic partnerships, potential acquisitions, as well as its film, tradeshow and merch programs. He gave a talk on DVD distribution at the Slamdance Film Festival in 2006 and on Producing and raising money for independent films at Slamdance in 2008.

Would you like to know who am I talking about?

I had a chance to talk with Brian Felsen for Turkish Journal. Here is our interview:

What’s the strongest memory that comes to mind of growing up as a Jewish American?

When I was six, the children who lived down the street from me felt my head to see if I had horns. They were disappointed: they’d felt the wrong part of my head.

You lived in Turkey, didn’t you? Which wind send you over there?

The wind coming out of the lips of a supportive spouse, as well as a thirst for experience.

How would you describe being a Turkish inlaw?

Inside the household, you get to experience the full range of warm emotions emanating from a Mediterranean spouse. Outside, you don’t get the strong sense of community because Turkey is itself so torn (and Fetullah has a strong influence in the small community in southern California); I also wish, from a networking perspective, that the expatriate community were more powerful and cohesive. When I visit Turkey, sometimes I feel quite welcome as an “eniste,” whereas at other times, Turks seem to have be burdened with preconceived notions either about how I would regard them or about the unfortunate behavior of my government.

Did you know anything about Turkish music industry before being over there?

What was the situation in Turkey with pirating the songs, albums when you were there?

Turkey is not and never has been, a friend of intellectual property rights.

At the end what stays in your mind about Turkish music?

While I think of its incredibly rich tradition of folkloric music; gypsy-influenced music and even arabesque in the gazinos; what stays in my mind is Nil Karaibrahimgil.

Being a multimedia artist is not that easy, is it?

Anything’s easy if you’re talented, set your goals low, and do it poorly enough!

What does affect your music…?

What are the advantages and disadvantages that you have experienced as a American musician?

There are boundless opportunities to create and distribute, but it’s also flooded with content, so capturing the attention of an audience is always a challenge.

If you were not American, how would your music be different than today?

Unlike many other English-language classical composers, my melodic lines are very much informed by the natural rhythms of English speech, so if I weren’t American, they’d all be written in blue ink and in 3/4 time.

Everything is so much faster now that music is a commodity and makes it hard to create a fan base since people are capable of reaching to the musics of far away places. “The music business is changing in the US. The groups are more willing to make more concerts and touring. Making an album is not enough” they say… What is your opinion about that?

My opinion doesn’t matter… It’s like asking one’s opinion on evolution or gravity – they’re facts, and you live in this world, no matter how much you may pretend or wish it were otherwise. If there’s a flood of content, contraction of the traditional industry, declining sales, a rise in theft, and if artists now can sell songs for pennies instead of dollars, merchandising and touring are your only options, unless you get really lucky or have an outlier talent that’s palatable to large groups of moneyed people – or can earn your income by other means.

What is a good piece of music?

The song “Add It Up” by the Violent Femmes is a good piece of music:
Beyond that, I’ll quote U.S. Supreme Court Justice Potter Stewart in his opinion in the 1964 “The Lovers” obscenity trial: “I shall not today attempt further to define the kinds of material I understand to be embraced within that shorthand description “hard-core pornography”; and perhaps I could never succeed in intelligibly doing so. But I know it when I see it, and the motion picture involved in this case is not that.

Which musicians did have an influence on your music? What have you been listening recently?

Too many to mention.

What’s the best piece of advice you will give to Turkish musicians for international success?

The odds are against you; you don’t come from a particularly networked or supportive community; so do what makes you amazing and have fun.

In 2000, you produced and edited a 158-minute documentary film about the Turkish military interventions and coups d’etat, Coup (Darbe), Could you tell us about this movie a little bit?

Are there any recent project that you are involved?

I’m currently the President of CD Baby (www.cdbaby.com), the largest online distributor of independent music on the world.

When I have the time, I’d like to record the secular gospel music which I wrote before I started running CD Baby.