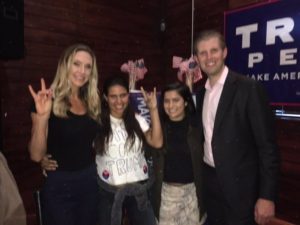 During a North Carolina rally for the Republican presidential nominee, Donald Trump‘s son, Eric Trump and his wife Lara, posed for a photo with Annie Cardelle wearing a shirt that said “Latina contra Trump” which means “Latina against Trump”

Annie Cardelle, creator of the shirt, published photos of the rally on Twitter Friday evening and  the story became viral. I had a chance to contact her and asked her thoughts. I wondered how is the reaction now?

“The whole protest was supposed to be a quiet one- in a election that has been very loud and brash, I wanted to make a non-aggressive statement.” she said and told us all about:

“The only person who noticed when my sister was taking photos of me wearing the shirt was a reporter from our local paper. After the speech we spoke to him briefly, and he almost jokingly asked us if we were going to get a picture with Eric and Lara. It wasn’t intended, but we thought it be funny to try. We waited in line, talked to other supporters- who at the event, were incredibly kind and gracious to us. I’m sure they would have been even if they knew we were against Trump too. I had not experienced any kind of racism or aggression until the story became viral. I find it ironic that Trump supporters would respond to my protest against their candidates racially charged hateful rhetoric with racially charged hateful rhetoric towards me.

I don’t think Eric Trump, his father, or anyone in their family is ‘dumb’ or uneducated. I think they just didn’t notice the shirt. What is important to focus on is that Donald Trump has mobilized a large group of people in this country for multiple reasons, some feel attached to his economic issues or his populist ideals, but there is a significant amount that resonate strongly with his anti-immigrant, racially exclusive, misogynistic rhetoric.

This election has been incredibly disappointing for millions of Americans because we feel we must choose a candidate due to the negative qualities of the opposing candidate. And his negatives are some of the most racist, vicious, and frightening rhetoric I have seen in my lifetime. It is a privilege to vote, and I intend to do so in order to stand against a man who has conflated Latin people with murders and rapists, who has tried to ban religions,  who does not take police violence against African Americans seriously, and who continually others and alienates people of color and woman in this country.” 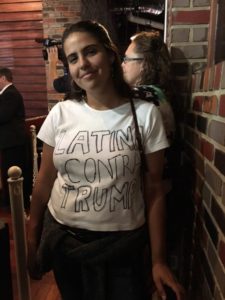