An Interview with an accomplished musician Fatima Spar. 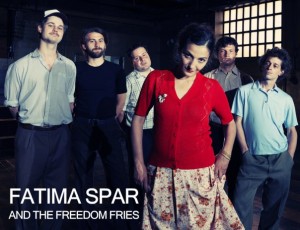 Over the past few years, the band around front woman Fatima Spar has found its own particular sound. They confidently move in a self-conscious style between tradition, and modern age. Without giving in to the music hypes of the day or sacrificing their own musical edges to the market, Fatima Spar and The Freedom Fries instinctively succeeded in finding their place between Alternative, World and Jazz. Fatima Spar und die Freedom Fries consist of Nihal Senturk (Fatima Spar – vocals), Alexandar Wladigeroff ( trumpet), Andrej Prozorov (sopran sax), Philip Yaeger (yrombone), Milos Todorovski (accordion), Florian Wagner (guitar), Philipp Moosbrugger (bass), Erwin Schober (drums). They were formed in 2004 – an Austrian folk brass band with a Turkish singer that integrates jazz and many musical styles mainly from southeastern Europe.

Hopefully they are planning to have a USA tour on Spring 2010.

I had a chance to talk with Nihal Senturk (Fatima Spar)

She has been singing and songwriting most of her life, and grew up playing the guitar. After high school she began studying music, theater arts, fashion and clothing technology in Vienna. After she decided to dedicate her life to music, she founded the band “Fatima Spar and the Freedom Fries” in 2004, with which she is known internationally. She writes her songs in Turkish, English and German. Her style ranges from swing, Balkan brass, calypso and oriental music. Spar has been nominated for the Amadeus Austrian Music Award and the BBC World Music Award and more… Her group was also the first Austrian band that played in the official program of WOMEX.

Here is our interview…

What’s the strongest memory that comes to mind of growing up as a Turkish?

What does affect your music?

How does music reflect your view?

It does reflect my view at a fraction and that’s one reason why I can’t stop writing and have to express myself on and on through new lyrics and new music.

What are the advantages and disadvantages that you have experienced as a European musician?

It’s the first time that somebody calls me a European. Normally I am limited to Austrian or Turkish and both don’t fit but European yes if I had to give it a name. I don’t like to be evaluated for geographical circumstances but people do. To answer your question, I was welcomed wherever I went. Though sometimes felt a stranger or exotic. Never in a negative sense.

What is the story behind your last album?

I have read a racist propaganda letter in a baseline which said kill all Muslims with a drawing showing a man hanging at the scaffold. This was the main intention to write the song trust which is the album title. The main intention was to record a new album after a 2 years break.

How long did it take to agreement with the musicians for this album?

We are a band – it was clear that we are going to record a new album together.

How do you like to work with your group?

Every member has a strong character. It is never boring and we love each other though we have differences here and there.

Are you planning to have a USA tour?

What are the feelings about the USA?

Are there any recent projects that you are involved?

Nothing I would mention. I am working on my new swing band and also another solo project of mine but it is too early to talk about it.

Well, I would like to ask you, what a good piece of music is?

From music of a high artistic level too popular music, they should evolve from a deep devotion and has to be musically interesting. You find good music in all genres.

Which musicians did have an influence on your music?

What have you been listening recently?

If you were not Turkish, how would your music be different than today?

I wouldn’t sing in Turkish. The style would be less Turkish influenced I guess but more or less the same.

What’s the best piece of advice you will give to young musicians for success?

Don’t try to be somebody you are not – assign priorities – stick to your principles – don’t forget to listen to all kinds of music – focus on one main thing – work up your talent and don’t believe everything what managers or the industry say.

How do you want to be remembered?

We are still looking for new partners; we have started to write new songs. We are continuously growing with new members. We never stand still!