“Unfortunately Obama will pay the price at the polls” 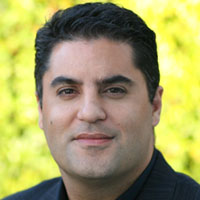 As the midterm election cycle finally approaches its end on Tuesday, the media will continue to be full of stories. Almost every political analyst agrees Democrats will lose congressional seats Nov. 2. I talked to Cenk Uygur about the US midterm election and more…

US midterm elections only hours away and I had a chance to talk Turkish-American journalist and political commentator Cenk Uygur. He is the main host and co-founder of the talk radio show The Young Turks. He also has a column in The Huffington Post and is a regular substitute-host and contributor on MSNBC. A graduate of the Columbia Law School, he previously practiced law in New York and in Washington D.C…

“Democrats will lose the House of Representatives and barely hang onto the Senate. Democrats do better in generic polls but they are set to lose the elections.” he said.

When I asked the reason, here is his answer:“Because people are really mad about the economy and at politicians who never do anything for them. Democrats are in charge now, so they will be punished.”

If The Republicans gain the majority at the midterm elections, how would that affect the relationship between the Congress and The White House?

My guess is that Barack Obama will spend the next two years like he spent the first two years — trying to make the Republicans happy, and not succeeding. The Republicans demand everything and unless Obama gives in — which he will sometimes — they will not be happy. There will be a lot of fighting and not much done. If anything gets done, it is likely to be on the Republican agenda, not Democratic agenda.

What do you think about the Tea Party?

The Tea Party was positive in the beginning because they were protesting against the banks and the politicians who helped them take our taxpayer money. But very soon their leaders were bought by — the banks. Now, they are useless and help the richest people in the country. They are suckers.

Do you agree that there is a conflict between the Tea Party and the Republican Party establishment?

The fight between the Tea Party and the Republican Party is a fake fight because they are funded by the same people. The billionaires and the multi-national corporations that fund both things win either way.

What is your assessment of Obama’s first two years? Could you compare his preelection promises to his actions after taking the office?

Obama promised fundamental change during his campaign and in his two years office he gave us pocket change. I think he misunderstood what we meant by change. We didn’t mean we wanted a little change in the policies, we meant we wanted to change the system. He didn’t do that at all and tomorrow unfortunately he will pay the price at the polls.

Do you think there will be other candidates from Democrats for the 2012 elections? Hillary Clinton or anyone else?

In 2012, I would be surprised if there was a legitimate challenger to President Obama within the Democratic Party. You’ll know it’s serious if it’s Howard Dean. But there is very small chance of that. Within the Republicans I think Jim DeMint will rise. He is their Barack Obama, except he wants no change, he loves the way Washington runs and wants to help the richest people in the country at the expense of the middle class. He is the Obama of corporations who want to take over the US government, which they largely already have.

What about Mayor Bloomberg?

Yes, among independents, he has a realistic chance and he might be able to beat Obama. He is a strong leader and has enough money to run a national election but it’s very hard to tell where he is going to come out on real reform of the system.

How will Supreme Court decision to lift the limits of campaign contributions effect the elections in long term?

Citizens United was a disaster of epic proportions. It lets our politicians be completely bought. If it doesn’t get fixed, America will be one giant piggy bank for the rich and multi-national corporations. If you are a company anywhere in the world, you can get in on it. You would be surprised how easy it is to buy an American senator. Just some campaign donations will do it. This will go on until the population revolts, though I don’t know how.

How do you see Turkey-USA relations?

Turkish-US relations are in trouble now because of the Freedom Flotilla. Turkey’s lobby is nowhere near as good as Israel’s lobby. In America, lobbyists determine everything. For example, since the gun lobby is the strongest, even people on the terrorist watch list can buy guns. I’m not kidding. This country has lost its mind — and its soul.

Last question: What do you think about J Street and AIPAC?

J Street is very important because most Jewish Americans vote Democratic (about 70%)and want peace in the Middle East. AIPAC has been going in the opposite direction. It is a great thing for peace that J Street exists now and is fighting back– and actually representing the real views of Jewish Americans. So, we end this interview with some hope.

Interview with Cenk Uygur at 2008: “The Young Turks” is the first nationwide ‘liberal talk show’ in US